China is famous for “baijiu,” a traditional alcoholic beverage with a high (40-70 percent) alcohol content and with 5 billion liters sold all over the world in 2016. 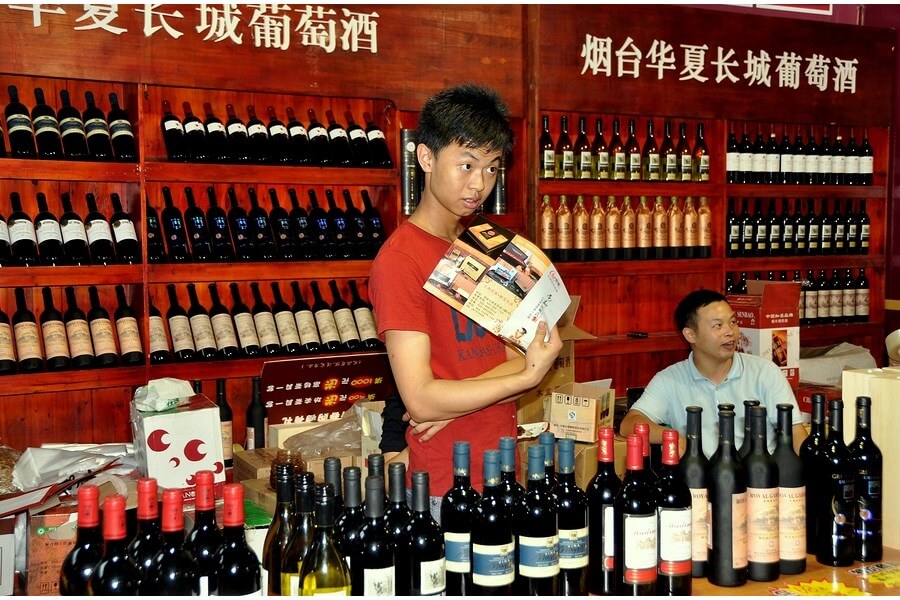 However, since the rise of the Chinese middle class, Wine drinking has been increasingly popular. Red wine has become especially popular, with the colors of the Chinese flag and political displays mostly using that color. It has become the drink of choice among the middle class, and even political officials. The drinking of Chinese wine, and imported wines is on the rise.

China holds the top position on the import of red wine and is the sixth largest consumer of all produced wine in the world (1.73 billion liters). According to experts, with a population of 1.379 billion, China’s potential is enormous, in three years the sales in the country will reach 610 billion liters of wine per year. The Chinese wine industry has massive potential.

Moreover, China is the second largest country in the world after Spain regarding total vineyards by area (847 thousand hectares) – ahead of France (785 thousand hectares), according to studies done in 2015. The climate changes dictate new rules for winemakers. The “Australian Sun” has published the results of a study according to which climate change can and will damage vineyards. At the least, it will affect the quality of the wine produced.

First of all, it concerns France, Southern Italy, Spain, and also Northern Argentina. Due to frost and hail, from 2012 to 2016, the storied wine regions of Burgundy and Piedmont (the birthplace of red wine Barolo), lost about 50% of their crops. Argentina’s wine exports this year fell by 18 million liters. The production of Brazilian wine decreased by 55% – the reason was the strengthening of the El Niño. However, the rapid growth in output is observed in countries that previously could not boast of the development of winemaking – in Canada, New Zealand, Britain, and the northern regions of China.

Chinese rice wine was historically the most popular wine in China. These stronger tasting wines have enjoyed more popularity than sweeter offering enjoyed elsewhere, such as Japanese Plum Wine.

The Chinese had started making wine almost 3000 years ago when grapes were imported from Persia and planted around the Emperors palace. For centuries, winemaking has known the periods of prosperity and decline. From the beginning 17th century and onwards, vineyards began to recover in China. To help facilitate this, grape plants were imported from Turkestan and other regions. In the early 1990s, to support the developing wine industry, the government created an extensive irrigation system and included winemaking in the overall development strategy of the country. In 2005, the government helped to open their first “demonstration” winery “Helan Qingxue.”

“Basically, Chinese wine is produced for the domestic market. Until recently, the wine had such a poor quality that it hardly met Western standards” –  Ma Huikin, a professor at the China Agricultural University in Beijing.

The turning point was in 2011 when wine from “Helan Qingxue” won the gold medal at the prestigious international competition of the British wine edition “Decanter.” Since then, an previously unpromising industry has become incredibly popular. This success has given way to notion among many Chinese investors that wine is a viable way to make money. However, some are concerned that the boom in the wine industry will lead to land speculation, or losses on the investment in the land that could be used for other, proven purposes. Chen Deci was one of the first investors in Ningxia, who bought 25,000 acres of land in 2007. He has since divided them into separate territories to create 100 “mini-castles” for wealthy Chinese.

China holds the top position on the import of red wine and is the sixth largest consumer of all produced wine in the world (1.73 billion liters).

Other investors are sure that wine quality will suffer because of the boom of the wine industry. In the initial push to grow vineyards in China, most wine was consumed by officials and heads of state institutions. These individuals bought expensive wines for banquets or as gifts. They encouraged the planting of grapes but did not think about the quality of wine, only that grapes were being grown. The combination of suitable soil, favorable climate, and proper care make each vineyard unique, and they had not taken this into consideration.

Due to the anti-corruption campaign in China, the demand for expensive wines began to fall. This “shake-up” forced winemakers to focus on a new target audience, the middle and upper class Chinese. These people appreciate wine for its taste and enjoyment; not as simply gifts or status symbols. The tastes of the middle class Chinese are of wines from France and America. Their tastes have become refined and exquisite for a culture that did not traditionally drink “western” wines. To expand the customer base, Ningxia winemakers actively supply wines to large cities.

Influence On The World Wine Market:

The growth in demand in Asia has had a positive effect on the overall situation in the wine industry. Over the past 50 years, wine consumption in the Old World has declined dramatically. Growth in consumer demand in North America and Asia compensates for those negative trends.

“In China, the middle class is growing, and with it the demand for quality imported wine. Following the results of the first half of 2017, China purchased 254 million hectoliters of wine worth $ 1.146 billion, which is 13.9% more by volume and 3.34% higher than in the same period last year. Within three years we will certainly become the second wine market in the world,”

-Wong Xu Wei, the director of the China Association of Imports and Exports of Wine & Spirits.

Today, France occupies 42.6% of China’s wine market, which is 10.2% less than in the previous year. But stable growth is shown by the favorite Chinese wines from Australia and Chile – 25.1% and 10.5% of the market, respectively. Both countries are active because they signed free trade agreements with China. Over the past five years, the import of Australian wine to China has increased by 10% per year.

The Chinese wine market is growing, both production and demand are at all time highs. With such a large population, and a growing, thriving middle class; these numbers will only trend upwards over time. With investment and wine growth on the rise, we might soon see Chinese wines in North America and other countries. This is an incredible time for wine, globally. With growing markets across Africa and Asia; we will only see better wines, and more options.