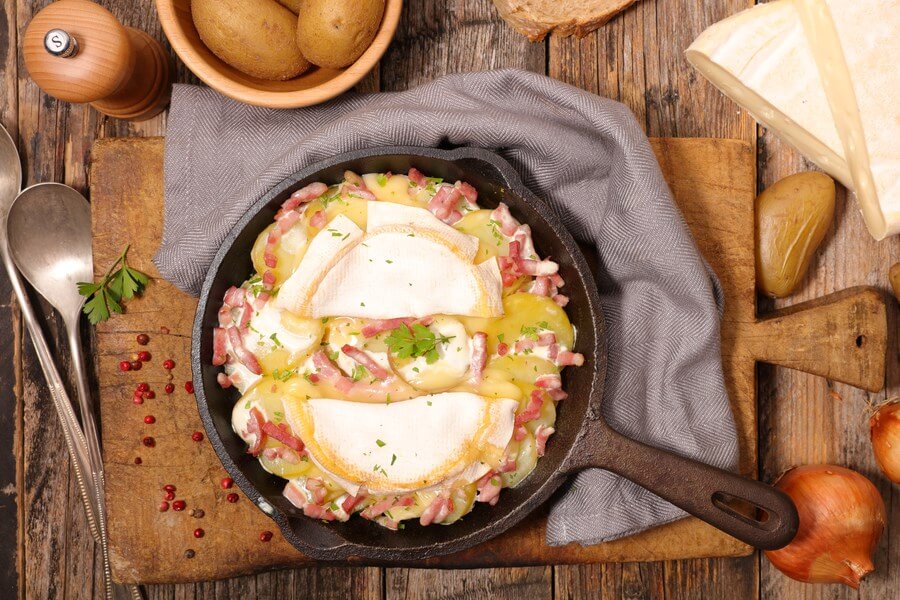 The Wine Bacon French Tartiflette is a luscious, sumptuous dish from the French Alps. Furthermore, made with beautifully rendered Lardons, French Reblochon cheese, and potatoes; this simple and delicious dish will hit the spot time and time again. Wine Bacon, potatoes and cheese, how can it go wrong? Discover this traditional French dish and take your family on a trip to the alps without leaving the comfort of home.

Moreover, the Wine Bacon French Tartiflette embodies the spirit of the French Alps. Full bodied, as well as hearty; the tartiflette is perfect for warming up in the cold, or comfort food after a long day.

Check Out the amazing health benefits of white wine!

First, bring a large pot of salted water to a boil over high heat.
Second, add the peeled and sliced potatoes into the boiling water. In addition, keep in mind the temperature of the water will drop when the potatoes are added. Therefore, wait until a rolling boil resumes, then reduce the heat to medium-low and cover.

Next, simmer the potatoes until fork tender, roughly 15-20 minutes.

Then, drain the potatoes and allow to dry in their own steam
Preheat the oven to 425 degrees F (220 degrees C).
Grease an 8-inch square baking dish.

Fry the thick sliced bacon (Lardons) in a skillet over medium-high heat for nearly 5
minutes, or until fat has rendered and they are a deep brown.
Afterward, remove the bacon and pour off bacon fat.

In the same skillet, melt the butter and add the onions. Cook and stir the onion until they are
translucent. This Process will take roughly 5 minutes.

Return the bacon to the pan and add the white wine.
Once the wine is added, simmer gently until most of the wine has evaporated.
Next, Remove the contents from the heat.

Cut the rind from the Reblochon, and cut into thin slices.
Lastly layer the Reblochon slices evenly over the top of the casserole.

Bake in the preheated oven until cheese is melted and slightly browned. This may take 15-17 minutes.

Season to taste with salt and pepper and serve hot.

Enjoy a taste of the French Alps with your family! The Wine Bacon French Tartiflette is the dish to try! Ultimately, Indulge, and dive into unique French cuisine!

This rich, delicious beef Bourguignon recipe will become an instant classic in your home! Try it today!

Rich, creamy white wine fettuccini with salmon is the perfectly balanced indulgence dish! Giving you what you crave, and what your body needs in one!

Savory almond chicken in a nutty, cream sauce with mushrooms and onions come together to form an amazing, balanced dish. Try it today!