The top wine producing countries in the world produce unthinkable amounts of wine. 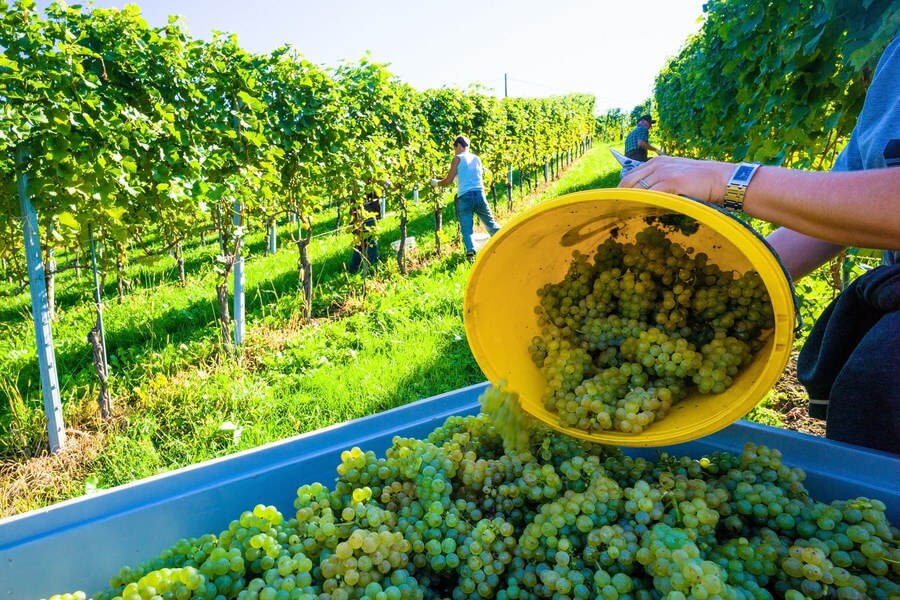 In 2017 alone, over 24.67 billion liters of wine shipped worldwide. Furthermore, if that sounds impressive, that’s because it is. However, this poses the question of: “Where on Earth is all of this wine coming from?” It might surprise you to learn that well over half of this figure comes from only three wine producing countries.

While other countries make notable wines, their output pales in comparison to the three world leaders in winemaking. Moreover, No matter your flavor preference, there’s a good chance that Italy, France or Spain was responsible for the bottle on your table tonight.

First, it’s no surprise that the country with over 400 wine grape varieties and over a dozen wine regions is the number one producer of wine in the world. Dating back to 800 BC, Italy’s winemaking roots run deep. As well, from the Pinot Noir of Valle d’ Aosta in the north-west to the Catarratto that Sicily is renown for, over 1.5 million acres of vineyard produce the world’s most cherished wines.

Though Italy hosts many wine regions from shore to shore, there are three regions that are particularly famed. Moreover, Tuscany, Veneto, and Piedmont produce the world’s highest quality drinking wines.

Learn about The Strangest Wine Laws Around The Globe!

Bordeaux is the only French wine region with direct access to the sea.

The 3 Top Wine Regions of Italy

The Veneto wine region famously produces Valpolicella, which is a red blend of Corvina, Rondinella and Molinara grapes. However, some fantastic Merlot also comes out of this region. As far as white wines go, Soave made from Garganega grapes is particularly popular. This rich white wine experience bears some strong resemblances to Chardonnay.

Piedmont’s claim to fame is primarily its Moscato d’Asti. The Nebbilio grape grows in this region and thrives for its high tannin and acidity.

As the third-largest of the wine producing countries, Spain possesses diverse landscapes that host its over 1 million acres of vineyard. In addition, the variety of climate across these regions produces unique and sometimes unexpected wines of red and white varieties. Moreover, the lush greenery of Galicia produces delectable white wines and the Mediterranean coast brings to us robust reds and the Cava of Catalonia. For a country with over sixty wine regions, there are two that garner the most attention: Rioja and Priorat.

Priorat, a dry and mountainous region, is inhospitable to most crops. The only exceptions are wine grapes and olives. Ever since reclaiming the Priorat region after Fancisco Franco’s agricultural programs all but wiped out the region’s usefulness as a wine region, Priorat has been making the richest and most robust reds. In the 1980s, winemakers took a chance and decided to resume growing their wine grapes on the mountainsides. This endeavor was incredibly successful.

The Rioja region of Spain is perhaps the singularly best-known wine region in the country. The wine producers of Rioja remain true to traditional winemaking techniques, which have undoubtedly helped to propel the region’s fame. Its reds are of the highest possible quality. This includes fruity Cabernet Sauvignon and the distinct cherry found in Pinot Noir.

However, the most famous red wine to come from Rioja is also named Rioja. It is a unique blend of Tempranillo, Garnacha, Mazuelo, Graciano and other grapes that thrive in this winemaking region.

France has enjoyed a long reputation as being one of the world’s most significant wine producing countries. The roots of French wine trace all the way back to when Romans first brought the practice of viticulture to France. Ever since the rise of Catholicism, in which wine plays a part in religious a ceremony, the country’s authority in winemaking has never waned.

There are seven “top” winemaking regions in France, but three regions, in particular, boast some significant notoriety. Burgundy, Champagne, and Bordeaux are the oldest of France’s wine regions and produce some of the highest-quality wines on the planet.

The chalky soil and unique composition of the Champagne region produce the greatest wines named after it. A taste of real champagne straight from the source is an opportunity that you should never turn down. The combination of the soil’s unique properties and the skills of the winemakers in Champagne creates an experience that nobody has yet replicated anywhere else.

Bordeaux is the only French wine region with direct access to the sea. This established the area’s prominence as a wine trading route long ago. The majority of wines produced in Bordeaux are rich reds made from Merlot and Cabernet Sauvignon. You can expect medium to full-bodied wines with notes of black currant, cedar and other unexpected flavors to come from this region.

Burgundy produces some of the world’s most expensive red and white wines. Furthermore, these reds are essentially just Pinot Noir and Chardonnay due to the grapes used in their production. What makes these wines stand out is their sense of terroir. Take one sip and you will taste the unique growing climate of the finest wine growing region in France.

Given that these wine producing countries are responsible for the majority of wine you will serve or enjoy. Their reputations are well-established for generations, and it doesn’t seem that this will be changing any time soon.

Organic wines with no pesticides and reduced environmental impact are important, find out how and why!